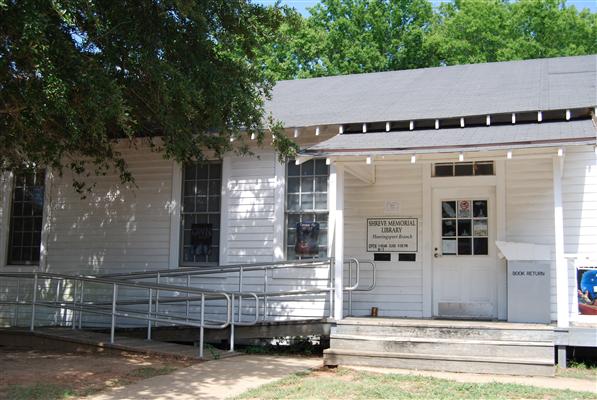 The Mooringsport Branch opened June 18, 1930, as one of the first five rural part-time branches in the parish. Mrs. L. G. Bonham was the first librarian. As at the Ida Branch, space for the library was provided by the local Masons, and the materials and labor were donated by private citizens. The original book collection was 177 volumes.
In 1940, the branch moved into the new Village Hall, and in May 1947 it moved to a larger room in the same building. The branch later moved to the community building facing the elementary school, which formerly housed the home economics department. The building was divided, with one side serving as the library and the other side housing the Mooringsport Community Center.

In October 1975, the Library Board approved a motion to renovate and repair the branch, pledging the library’s support up to $4,000. Mooringsport Mayor Robert Guth was asked to supervise and contract for the work to be done on the branch. Work was completed by January 1976 at a total cost of $4,585. The library paid $4,000 of the cost and the Town of Mooringsport bore the rest of the expense. The library was 400 square feet in size.

The library’s 1996 capital tax issue offered those municipalities with a part-time library branch the opportunity to apply for a grant that could support remodeling, as well as construction of an addition or new facility. The grant allowed the municipality to retain ownership and maintenance responsibilities for the building. Mooringsport Mayor J. B. Nichols applied for $109,000 to renovate and extend the library portion of the building, with the Shreve Memorial Library providing an additional $10,000 for furniture, fixtures, and equipment.

The project was designed by William L. Gary and contracted through Integrity, Inc. The addition was 20’ x 38’ in size, making the building a total of 1,740 square feet. The addition was designed to be in exactly the same style as the existing 1920's frame building. The Mooringsport Community Center still occupies the other side of this building, and the Caddo Parish School Board formally granted the town a 20-year lease on the building. After renovations, the updated branch reopened on April 20, 2000.