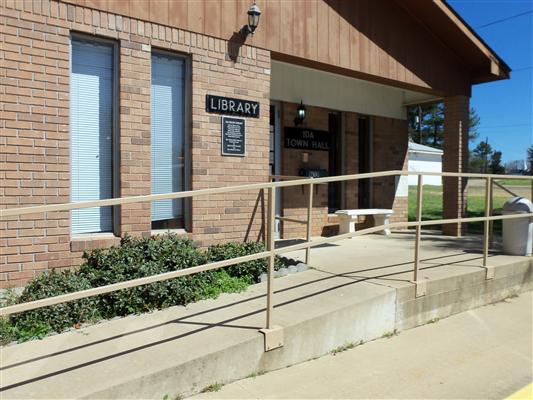 The Ida Branch Library opened on August 1, 1930 and was one of the first five rural branches sponsored jointly by the Caddo Parish Police Jury and Shreve Memorial Library. Jim Wynn, police juror, contacted Mrs. G. M. Middleton, president of the Ida Parent-Teacher Association, about the idea of establishing a branch in the town. The PTA agreed to collaborate, and a committee consisting of Mrs. Middleton, Stella Means, and Mrs. Charlie J. Smith worked to establish the branch, which was housed in the Ida Masonic Lodge. A 1930 library newsletter stated that “the Masons gave the space and the citizens gave the material and labor” to construct the library room. In 1932, the PTA renovated the room where the library was located. They added new flooring and wallpaper, a new window and door, and new furniture. In the spring of 1939, the branch moved into the lower floor of the Masonic Lodge.
In January 1970, the library moved across the street from the Masonic Lodge to a house owned by the Means estate. The James Taylor and Delle Bonner Means family donated the site to the Ida community, which was used to construct the new Ida Community Building. In January 1972, the Delle Bonner Means Memorial Library was dedicated, spanning 480 square feet in the Community Building alongside the Village Hall.

The library’s 1996 capital tax issue offered those municipalities with a part-time library branch the opportunity to apply for a grant, which could support remodeling, as well as construction of an addition or new facility. The grant allowed the municipality to retain ownership and maintenance responsibilities for the building. Ida Mayor Jerry A. Means applied for $65,400 to renovate and extend the library portion of the building, with the Shreve Memorial Library providing an additional $10,000 for furniture, fixtures, and equipment. The library moved to the opposite side of Village Hall and was supplemented by an 18 foot by 42 foot addition, built on land donated to the village by a private owner. The project was designed and managed by Ben E. Taylor, opening to the public in the spring of 2003.